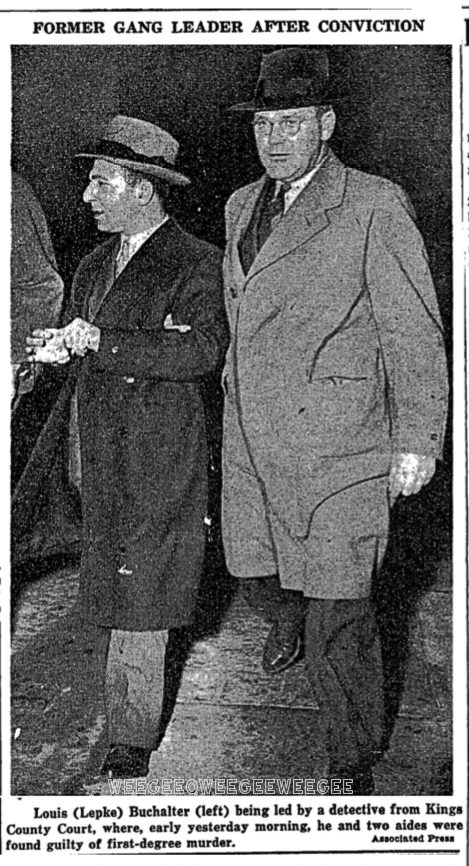 LEPKE’S FATE PUT UP TO PRESIDENT BY DEATH VERDICT

Louis (Lepke) Buchalter will be sentenced tomorrow to die in the electric chair for murder. He was convicted yesterday morning. But he says he’ll fight to the highest courts. He’s shown leaving court. 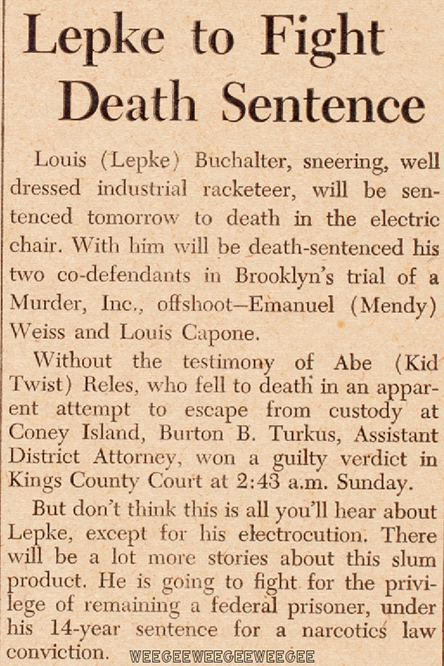 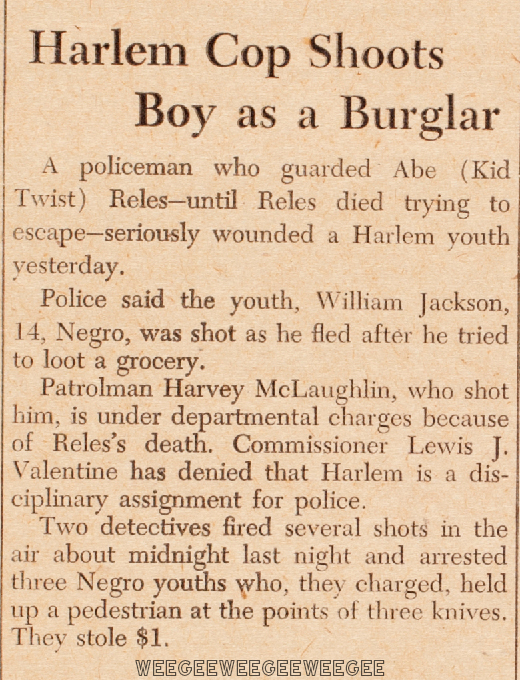 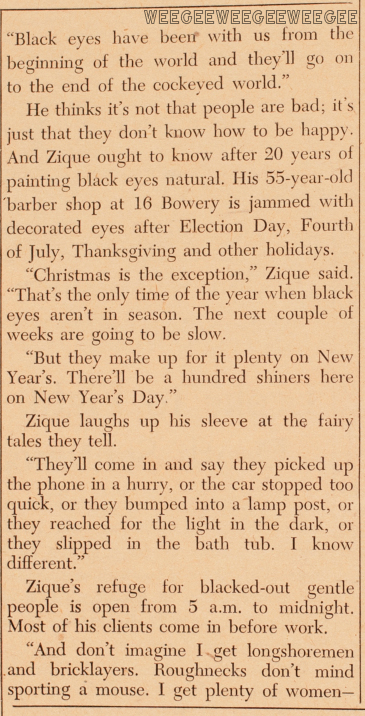 People Aren’t Really Bad, But They Get Black Eyes

Long Summing Up Is Due

“Waiting At The End Of The Road”; Harold Lang; Irving Berlin; Pathe Actuelle (32484) 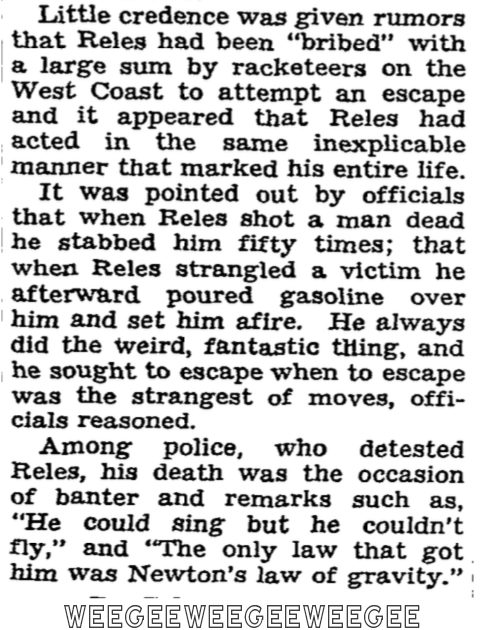 …speculation mounted as to Reles’s motive in attempting to escape that admittedly afforded him a haven from an underworld enraged… it was known that Reles feared only one underworld figure, Albert Anastasia… He always did the weird, fantastic thing…
He could sing but couldn’t fly”… 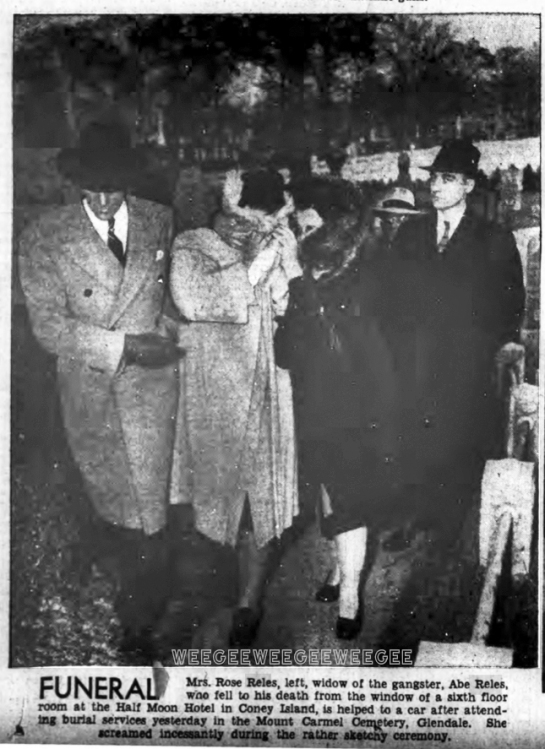 FUNERAL. Mrs. Rose Reles, left, widow of the gangster, Abe Reles, who fell to his death from the window of a sixth floor room at the Half Moon Hotel in Coney Island, is helped to a car after attending the burial services yesterday in the Mount Carmel Cemetery, Glendale. She screamed incessantly during the rather sketchy ceremony.


“Waiting At The End Of The Road”; The Kay Starr Style; Irving Berlin; Harold Mooney; Capitol (15910)

THE END OF THE ROAD FOR KID TWIST

And here’s the grinning Lepke himself – Louis Buchalter, born 44 years ago in the city’s slums. He’s under a federal narcotic sentence that would keep him in jail 14 years… Lepke is blamed for 14 murders or more; Reles was to have testified against him. The particular murder for which Lepke is on trial is that of Joseph Rosen, candy-store owner. Rosen had been a trucking boss in the garment center. O’Dwyer says Lepke ordered the job much as you would order the cook to kill a chicken for dinner.

… Until Death Mysteriously Removed One

And this is where it ended, outside the Half Moon Hotel in Coney Island, where Reles has been awaiting his chance to testify against Lepke. We don’t really know what happened. Some reports say Reles was trying to escape – with only a couple of sheets to let him down down the sixth floor widow (circle) to a roof overlooking the ocean. Reporters were told that a window on the floor below was partly open, and that the sill and his shoes bore marks indicating he tried to get in. Some authorities said he had been ill, that he might have committed suicide. 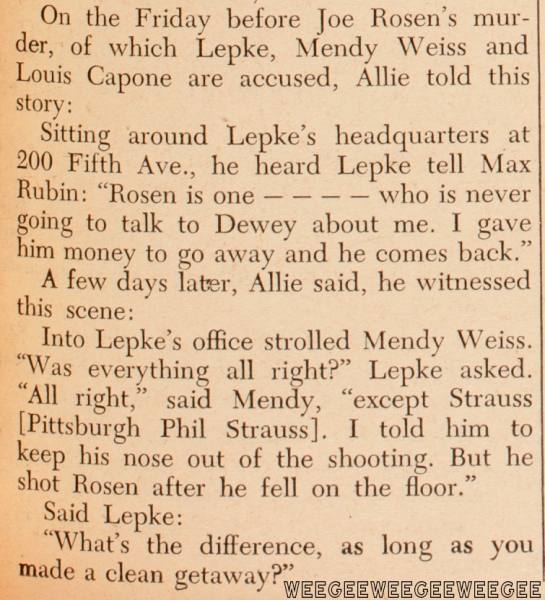 Abe Reles Leaps to His Death

Abe (Kid Twist) Reles, ex-leader of Brooklyn’s Murder, Inc. who turned informer, killed himself today by jumping from a window at Coney Island’s Half Moon Hotel…

Wire Breaks as He Slides to Freedom — Fear Held Cause

Abe Reles Dies in Plunge From Window of Hotel

Abe (Kid Twist) Reles 37-year old Brooklyn killer turned “informer,” whose testimony already sent two men to their deaths in the electric chair, was killed today when he fell six floors in trying to escape from “protective custody” in the Half Moon Hotel at Coney Island…

RELES IS KILLED WHILE ESCAPING

Abe Reles, the swarthy little murderer who sent two of his fellow members of Murder, Inc. to the electric chair, was killed between 6:45 and 7:10 a.m. today as he was trying to escape from a room on the sixth floor of the Half Moon Hotel in Coney Island…

80 years ago today: “Reles just went out the window!”… (Spoiler alert: It was a little premature to conclude that Reles leapt, jumped, was attempting to escape, or “killed himself.”)… What is true is that early on November 12, 1941 Reles went out a window and died on the Half Moon Hotel in Coney Island shortly before having to testify against Lepke…