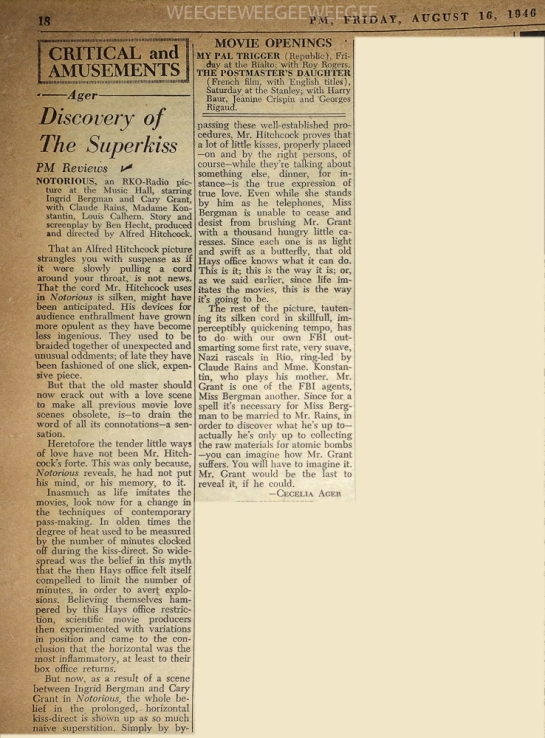 CRITICAL and AMUSEMENTS
Ager
“Discovery of The Superkiss

That an Alfred Hitchcock picture strangles you with suspense as if it were slowly pulling a cord around your throat, is not news. That the cord Mr. Hitchcock uses in Notorious is silken, might have been anticipated. His devices for audience enthrallment have grown more opulent as they have become less ingenious. They used to be braided together of unexpected and unusual oddments; of late they have been fashioned of one slick, expensive piece.
But that the old master should now crack out with a love scene to make all previous movie love scenes obsolete, is-to drain the word of all its connotations- a sensation.
Heretofore the tender little was of love have not been Mr. Hitchcock’s forte. This was only because, Notorious reveals, he had not put his mind, or his memory, to it.
Inasmuch as life imitates the movies, look now for a change in the techniques of contemporary pass-making. In olden times the degree of heat used to be measured by the number of minutes clocked off during the kiss-direct. So wide-spread was the belief in this myth that the then Hays office felt itself compelled to limit the number of minutes, in order to avert explosions. Believing themselves ham-pered by this Hays office restriction, scientific movie producers then experimented with variations in position and came to the conclusion that the horizontal was the most inflammatory, at least to their box office returns.
But now, as a result of a scene between Ingrid Bergman and Cary Grant in Notorious, the whole belief in the prolonged, horizontal kiss-direct is shown up as so much naive superstition. Simply bypassing these well-established procedures, Mr. Hitchcock proves that a lot of little kisses, properly placed – on and by the right persons, of course – while they’re talking about something else, dinner, for instance – is the true expression of true love. Even while she stands by him as he telephones, Miss Bergman is unable to cease and desist from brushing Mr. Grant with a thousand hungry little caresses. Since each one is as light and swift as a butterfly, that old Hays office knows what it can do. This is it; this is the way it is; or, as we said earlier, since life imitates the movies, this is the way it’s going to be.
The rest of the picture, tautening its silken cord in skillfull, imperceptibly quickening tempo, has to do with our own FBI out- smarting some first rate, very suave, Nazi rascals in Rio, ring-led by Claude Rains and Mme. Konstantin, who plays his mother. Mr. Grant is one of the FBI agents, Miss Bergman another. Since for a spell it’s necessary for Miss Bergman to be married to Mr. Rains, in order to discover what he’s up to – actually he’s only up to collecting the raw materials for atomic bombs – you can imagine how Mr. Grant suffers. You will have to imagine it. Mr. Grant would be the last to reveal it, if he could.
-CECELIA AGER