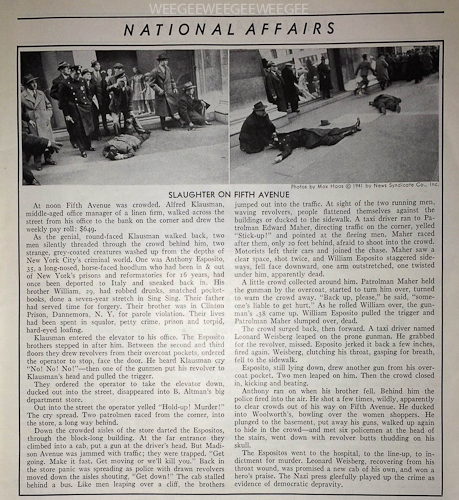 “At noon Fifth Avenue was crowded. Alfred Klausman, middle-aged office manager of a linen firm, walked across the street from his office to the bank on the corner and drew the weekly pay roll: $649. [Approximately $10,365.50 in 2014, according to an Internet inflation calculator…”]
As the genial, round-faced Klausman walked back, two men silently threaded through the crowd behind him, two strange, grey-coated creatures washed up from the depths of New York City’s criminal world. One was Anthony Esposito, 35, a long-nosed, horse-faced hoodlum who had been in & out of New York’s prisons and reformatories for 16 years, had once been deported to Italy and sneaked back in. His brother William, 29, had robbed drunks, snatched pocket books, done a seven-year stretch in Sing Sing. Their father had served time for forgery. Their brother was in Clinton Prison, Dannemora, N. Y. for parole violation. Their lives had been spent in squalor. petty crime, prison and torpid, hard-eyed loafing. Klausman entered the elevator to his office. The Esposito brothers stepped in after him. Between the second and third floors they drew revolvers from their overcoat pockets, ordered the operator to stop, face the door. He heard Klausman cry “No! No! No!” -then one of the gunmen put his revolver to Klausman’s head and pulled the trigger.
They ordered the operator to take the elevator down, ducked out into the street, disappeared into B. Altman’s big department store.
Out into the street the operator yelled “Hold-up! Murder!” The cry spread. Two patrolmen raced from the corner, into the store, a long way behind.
Down the crowded aisles of the store darted the Espositos, through the block-long building. At the far entrance they climbed into a cab, put a gun at the driver’s head. But Madison Avenue was jammed with traffic; they were trapped. “Get going. Make it fast. Get moving or we’ll kill you.” Back in the store panic was spreading as police with drawn revolvers moved down the aisles shouting, “Get down!” The cab stalled behind a bus. Like men leaping over a cliff, the brothers
jumped out into the traffic. At sight of the two running men, waving revolvers, people flattened themselves against the buildings or ducked to the sidewalk. A taxi driver ran to Patrolman Edward Maher, directing traffic on the corner, yelled “Stick-up!” and pointed at the fleeing men. Maher raced after them, only 20 feet behind, afraid to shoot into the crowd. Motorists left their cars and joined the chase. Maher saw a clear space, shot twice, and William Esposito staggered side- ways, fell face downward, one arm outstretched, one twisted under him, apparently dead.
A little crowd collected around him. Patrolman Maher held the gunman by the overcoat, started to turn him over, turned to warn the crowd away. “Back up, please,” he said, “someone’s liable to get hurt. As he rolled William over, the gunman’s .38 came up. William Esposito pulled the trigger and Patrolman Maher slumped over, dead.
The crowd surged back, then forward. A taxi driver named Leonard Weisberg leaped on the prone gunman. He grabbed for the revolver, missed. Esposito jerked it back a few inches, fired again. Weisberg, clutching his throat, gasping for breath, fell to the sidewalk.
Esposito, still lying down, drew another gun from his overcoat pocket. Two men leaped on him. Then the crowd closed in, kicking and beating.
Anthony ran on when his brother fell. Behind him the police fired into the air. He shot a few times, wildly, apparently to clear crowds out of his way on Fifth Avenue. He ducked into Woolworth’s, bowling over the women shoppers. He plunged to the basement, put away his guns, walked up again to hide in the crowd – and met six policemen at the head of the stairs, went down with revolver butts thudding on his skull.
The Espositos went to the hospital, to the line-up, to indictment for murder. Leonard Weisberg, recovering from his throat wound, was promised a new cab of his own and won a hero’s praise. The Nazi press gleefully played up the crime as evidence of democratic depravity.”