One of the most important photography/Weegee exhibitions opens today April 7, 2017 at Fotografiska in Stockholm.
Many of the photos and many of the captions on the backs of the photos have never been exhibited before…
Brilliant work by Ryan Adams!

7 April — 28 May, 2017
An exhibition of some 350 photographs taken by the legendary press photographer Arthur Fellig, known as “Weegee”. Here, violent death rubs shoulders with budding love on the intense streets of New York, in a time when the city was almost under siege from the mafia and corruption. Weegee lived in the middle of this chaos, always first on the scene to document the horror and happiness and convey for a press that was constantly craving new scandals and revelations. We present many previous unseen photographs by Weegee accompanied by his laconic description of the often dramatic scenes. The photos were discovered in a forgotten archive, which is a detective story in itself…
The exhibition EXTRA! Weegee at Fotografiska is a historic document, which, given the current situation of organized gang violence and recent revelations of corruption in Sweden, retains its unfortunate topicality. We present a press photographer whose many crime scene photos documented the seamy side of New York in the 1920s, 1930s and 1940s. Born in Ukraine, Arthur (Usher) Fellig (1899-1968), known as “Weegee”, captured, in evocative documentary photographs, the intense street life of a city marked by corruption and organized crime.
Weegee created a strong cult around his charismatic personality and through his images, depicting love, misfortune, entertainment and sudden death, we gain a vivid insight into the turbulent life of the city. With a police radio installed in his car, he constantly followed emergency vehicles on their missions and was first on the scene to take pictures for the newspapers. Remember the newspaper vendors’ cry of “EXTRA, EXTRA”, promising the latest scandals and revelations!
“We are passionate about the history of photography. Weegee’s press images from the 1930s and ’40s New York introduce our visitors to a dramatic time when press photography made an impact as an important source of information. Weegee is a legendary name in crime reporting which he revolutionized with his special ability to create engaging images. If a fire broke out, he photographed the goggle-eyed and terrified onlookers rather than documenting the blaze. The same thing with murder victims or other tragedies – his photographs always make an impression,” Lisa Hydén, exhibition coordinator at Fotografiska, explains.
Weegee’s photographs are accompanied by so-called “slugs”, laconic descriptions of the often dramatic scenes. One such caption reads: “Wife kills policeman in argument over parking car”.
Weegee’s images were collected in a national archive of press material, under the auspices of the Newspaper Enterprise Association (N.E.A.), founded in 1902, that syndicated illustrations, cartoons and features. In 1920, the news agency Acme Newspictures, which focused on press photography, was founded. Over the decades, it amassed a gigantic photo archive, which, after various mergers, sank into oblivion for over 20 years. After some rather peculiar transactions, involving the son of a former employee acquiring the archive, and selling parts of it in 1994, the archive was again forgotten about. However, in 2012 it was discovered in a storage space in the Midwest by the photojournalism expert Ryan Adams, who has written the exhibition texts. Thus, most of the pictures featured in the exhibition have never been exhibited before, and the origin of this unique collection is a detective story in its own right, with Ryan Adams as the protagonist.
In 2012 Adams began the enormous, and ongoing, task of examining all the many boxes containing millions of photographs. The photos only contained brief captions, so-called “slugs”, but no photo credits, which was the custom at the time. Ryan Adams’ detective work, which involved comparing the images in the archive with images of identified photographers and other information, in an attempt to identify the origin of the photos, has led to the discovery of completely unknown photographs by Robert Capa, Margaret Bourke-White – and Weegee.
Ryan Adams describes the process as an important contribution to bring to light a previously unknown story through these snapshots.
“It’s an incredibly exciting feeling to be able to identify a photograph. It is an extremely time-consuming putting together of various pieces of information in order to demonstrate that a picture was taken a particular moment, at a particular place, by a particular photographer. At first, I succeeded in identifying ten unknown Weegee photographs. This number has now grown to more than 350. An important piece of the jigsaw, which we are now able to show in an exhibition for the first time ever, are his so-called “slugs”, the captions Weegee wrote in his distinct style to the newspaper desks with descriptions of the photograph. Weegee was also keen to place himself at the center of the action, often making himself part of the story. Of course, his presence makes the detective work a bit easier,” says Ryan Adams, who continues to explore the archive, searching for new discoveries.
The archive was bought by Daniel Blau (and the rights are owned by the International Center of Photography I.C.P.). 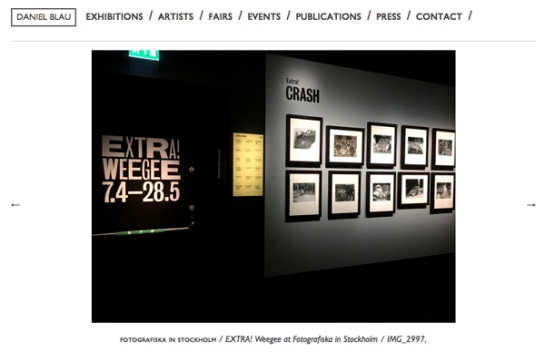 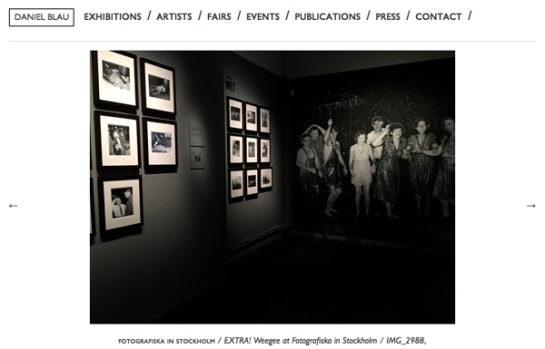 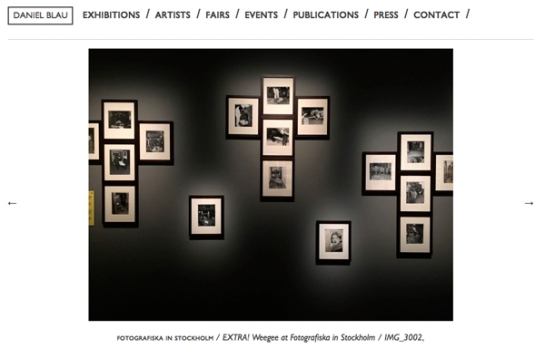 One of the most important photography/Weegee books will be published in August 2017.

Extra! Weegee
Edited by Daniel Blau
Distributed for Hirmer Publishers
320 pages | 620 color plates | 11 3/4 x 9 1/4
No photographer came close to capturing the sensations, scandals, and catastrophes of 1930s and ’40s New York like Weegee (1899–1968). His striking images—captured through his uncanny ability to be on the spot and ready to shoot when things happened—have become part of the visual vocabulary through which we understand the period. This book, however, offers something new: drawing on an NEA archive that was only discovered in 2012, it presents countless never-before-seen Weegee photos. We see new angles on many of his familiar subjects—from the hardened police officer to the loud-mouthed crook; the midnight boozer
to the dancing jazz musician; a dramatic conflagration to the celebrations at the end of World War II—but we also get a glimpse of an unknown side of Weegee through surprising photographs of happy people enjoying themselves. The works are complemented by a fascinating account of the rediscovery of the archive, which had been missing for decades.

Words and image from press.uchicago.edu

Looking forward to the book!