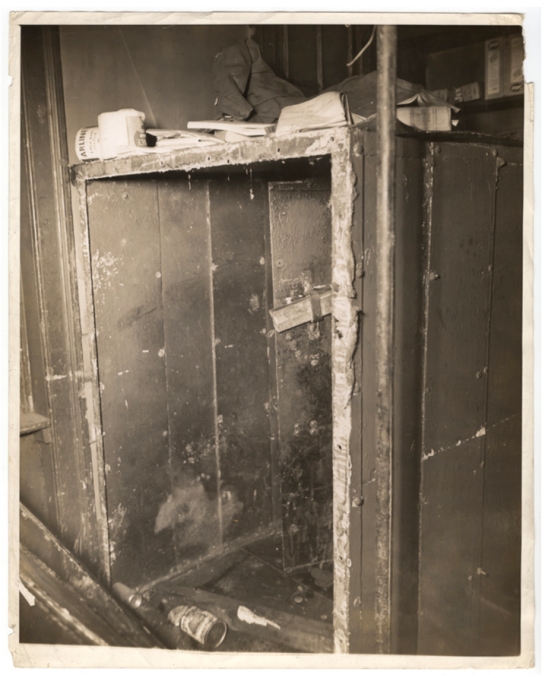 Page 220 of the essential and indispensable book “Extra! Weegee” features a photo of a large, empty box. The photo (exactly like the photo below) is cluttered and claustrophobic, yet empty. Perhaps it’s a crime scene. There are boxes, cartons, a coat, and papers on top of the empty box and on shelves in the background, there’s a can or two on the ground; a pole and it’s shadow are in the foreground.
Beneath the photo in “Extra! Weegee” is a caption:

“RECLUSE DIES IN COFFIN-LIKE BED.
New York – Nightly for thirty-five years, Jeremiah Erranght, 55, would lock himself in the four-foot square iron box and go to sleep. When Erranght, who kept to himself, not allowing anyone to enter his squalid two-rooms at 79 Allen St. was missed by neighbors, the police were summoned. Breaking into the apartment, the police were confronted with the strange box. Using torches, the box was opened and inside was discovered the body of Erranght. Neighbors say he is quite wealthy.”

It’s an intriguing and enigmatic photo, appropriately people-free; Grand Guignol reality from the gritty ghetto of the (Lower) East Side… We didn’t see any coverage in PM. The NY Post had the best coverage. The Daily News coverage was silly and the NY Times had a pair of articles. AP distributed a widely printed short story. All photo-free. (No mention in the press about the Selox soap boxes: “The Speed Soap. Saves time, clothes, work, money”; “The Speed Soap. Quick sudsing – safe – economical,” for clothes and dishes.)

NY Post, front page, then page 8:
“Dies in Coffin in Which He Lived.
Eccentric’s Body Clothed in Galoshes, Earmuffs”
“The mystery of Jeremiah Erranght, accurately nicknamed Dracula by a sharp-eyed East Side kid years ago… lived for 35 of his 55 years in a two-room flat at 79 Allen St… Yesterday police smashed down the door… and found him dead.
Like Dracula, the king vampire of Bram Stoker’s creation, the recluse had almost literally dwelt in a coffin. His six-foot length was found crammed in a four-foot-square sheet metal box, which he had built himself… its narrow door was padlocked on the inside.
…He had a job – coach washer for the Pennsylvania R.R. [in Sunnyside, Queens] – to which he went faithfully, clad in a black suit, black hat and a capelike outer garment…
He bought prodigiously and fantastically. A crate of eggs, two boxes of apples, 12 dozen oranges. Six boxes of candles… A case of ketchup…
…once a month the recluse would open his door a crack, slip $15 though and utter a single sepulchral word: “Rent.”
The police who forced their way into the place yesterday saw a strange sight. The windows had been nailed shut and were opaque with decades of grime. Two tables were deeply encrusted with dirt, as were two chairs…
The body was clothed in trousers and undershirt, galoshes and earmuffs. There was no bedding in the box.
Two old trunks held only yellowed scraps of paper, on which the writing was mostly illegible… and a key to a safe deposit box…”

AP: “…They broke into his unlighted and unheated room after neighbors reported him missing for several days and plowed through the trash-filled, furniture-less abode for half an hour before deciding to pry open the big box.
There, knees drawn up because of his six-foot figure’s space requirements, they found Erranght, wearing galoshes and ear muffs. Natural causes, they said, apparently brought the mystery man’s unnatural life to an end.”

Daily News:
“Lone ‘Dracula’ Dies In Box He Slept In
A mysterious, silent black-clad recluse, called Dracula by the children of the neighborhood, was found dead yesterday in a four-foot square, homemade sheet-metal box in which he slept at his one-room flat at 79 Allen St…
The room was without gas, electricity, heat or furnishings except the metal box and two trunks containing some newspaper clippings and faded letters…
His only purchases at a nearby store were candles and oatmeal…”

NY Times:
“Recluse Dies Locked in 4-Foot Metal Box
In Which He Slept Wearing His Galoshes
A taciturn six-footer whose long black cape and hat were a familiar sight on the East Side was found dead yesterday in a metal chamber that served as his bed in the two squalid rooms he had occupied for thirty-five years at 79 Allen Street.
Death was apparently due to natural causes, the police said… had pried off the lid of the boxlike bed 4 1/2 feet high and 4 feet wide and long… The chamber was ventilated by small perforations in its two-inch-thick walls…
…The only food in the rooms was oatmeal. There were a couple of broken tables and chairs and the metal chamber that a policeman said resembled a ‘medieval torture chamber.’…
…alarmed at not having heard the heavy iron door clang shut at night, Siebert [the janitor who lived next door] called the police.
In the neighborhood the children spoke of him as a ‘Dracula-like’ figure…”