Mrs. Anna Sheehan quarreled with her husband, who earned $30 [$599 in Feb. 2022] a week, last New Year’s Eve, because he had spent 50 cents [$9.99 in Feb. 2022] for a beer. In the course of the quarrel [Mr.] Sheehan was stabbed with a kitchen knife. He died of the wound. Mrs. Sheehan, charged with the death, shown with their three children, was acquitted by a jury in Queens County Court, New York City, after five hours’ deliberation. 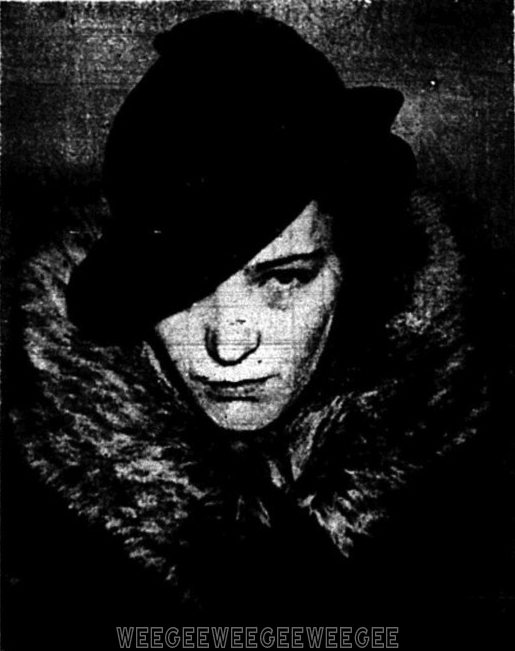 “IT WAS OUR FIRST QUARREL”

Mrs. Anna Sheehan, widow, left police headquarters, her eyes wet from a night of weeping, after being charged with the fatal stabbing of her husband, Joseph, aftermath of a New Year’s party. 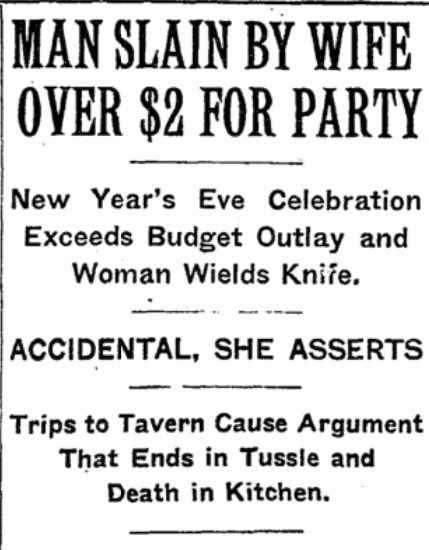 MAN SLAIN BY WIFE OVER $2 FOR PARTY 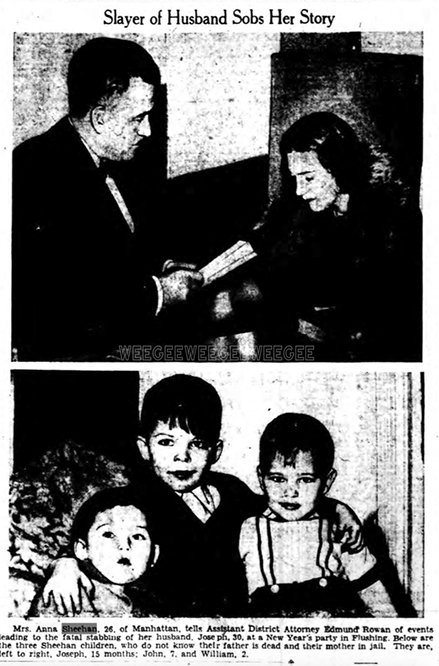 Slayer of Husband Sobs Her Story

Mrs. Anna Sheehan, 26, of Manhattan, tells Assistant District Attorney Edmund Rowan of events leading to the fatal stabbing of her husband, Joseph, 30, at a New Year’s party in Flushing. Below are the three Sheehan children, who do not know their father is dead and their mother in jail.. They are, left to right, Joseph, 15 months, John, 7, and William, 2.
Long Island Daily Press, January 2, 1937 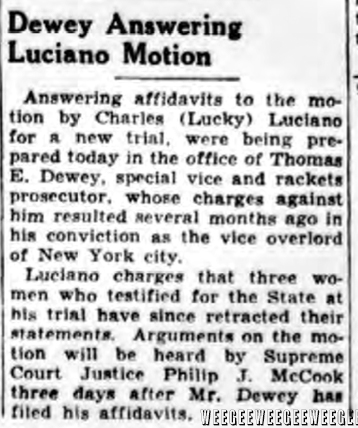 “Early one morning last week in the gashouse district on Manhattan’s lower East Side, a neat, grey-haired watchman named George Preston, 47, was caught setting fire to a rubbish heap under the stairs of a tenement house whose occupants lay sleeping. Watchman Preston, once a probationary fireman at Lynn, Mass., tearfully told police he took a few drinks every time he got a headache, set fires for excitement every time he took a few drinks. When he accompanied them to The Bronx, pointed out nine buildings he had previously fired, police believed they had cleared up a series of incendiary fires that have terrorized Bronx dwellers for two years. Firebug Preston carefully guided them, past locations where incendiary fires resulted fatally, pointed only to addresses where no lives were lost. Said the police: “These incendiary fires have caused us more worry than any five murderers.”
Time, April 26, 1937 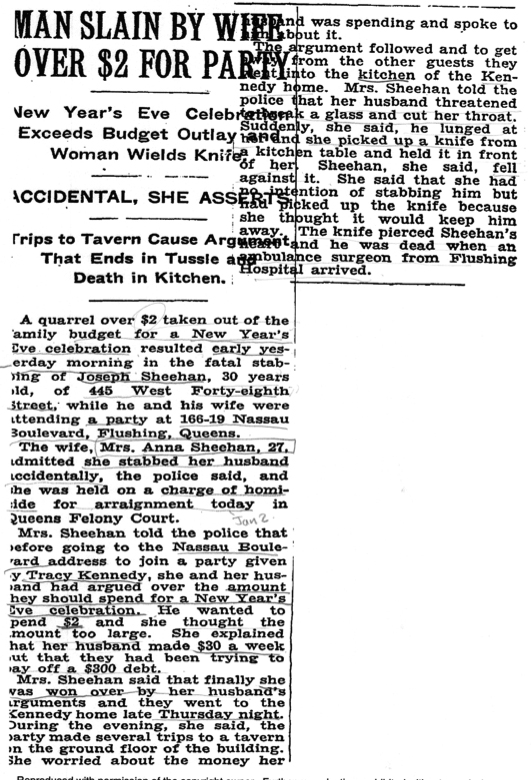 Daily Mirror, January 2, 1937 (unidentified photographer)
“The first tragic figure of 1937, Mrs. Anna Sheehan, mother of three children, is charged with stabbing her husband to death because he accused her of ever-friendliness with another at a New Years party…”

TOY PISTOL FAILS, COPS GET GUNGIRL
They got the girl in black yesterday, the soft-voiced brunette with the scarred lip who has been holding up restaurants with monotonous ease.
Her shiny toy pistol failed to scare three husky men – although it panicked a courtroom a few hours later when a policeman discharged it during her arraignment.
She said her name was Norma Parker. Police said it was an alias. She had been arrested four times on vice charges and had served two terms in the workhouse. She was at liberty in $1,000 bail on a charge of stabbing a girl friend at 134 W. 65th St. [Lincoln Center], last November, in an argument over a man.
Wore Familar Costume
It was 2 A.M. when she first appeared in a cafe at 75th St. and Columbus Ave. She was wearing the black seal coat and the small black toque…
She ordered two cups of coffee…
‘Give me another cup of coffee’ she ordered.
When it was half empty, she asked for change for a quarter. Hasapas opened the cash register and looked up into the muzzle of a nickel-plated pistol.
Three Men Grab Her
‘All right. Let’s have the rest of it,’ she said coolly. The counterman handed over $14 in bills and a couple of nickels. Just then the door opened. The gungirl turned around and Hasapas grabbed her arm.
Nicholas Billows… the customer, and George Meleos, the dishwasher, rushed to the counterman’s aid. Ignoring scratches, bites and kicks, they backed her into a phone booth and wrested the gun from her.
‘Please let me go! You’re hurting my wrist!’ she pleaded…
Denies Everything.
‘That’s the girl,’ said Albert Swank, the night manager.
In the police line-up, she faced the lights and microphone without the flicker of an eyelash. She denied everything, the holdup, the other jobs, even the stabbing…

Through it all the girl calmly chewed hew gum and drummed nonchalantly on the table top.” 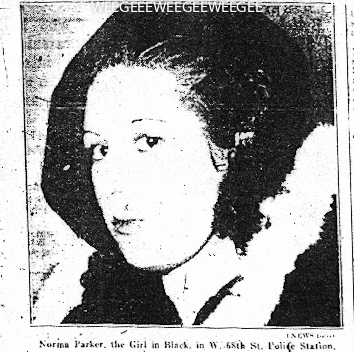 This is a Weegee photo, perhaps the other two are too…

Screenshot from a museum website… Weegee’s photos of Norma Parker… 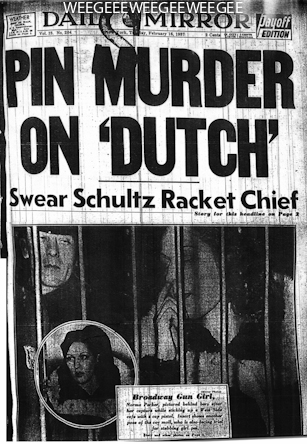 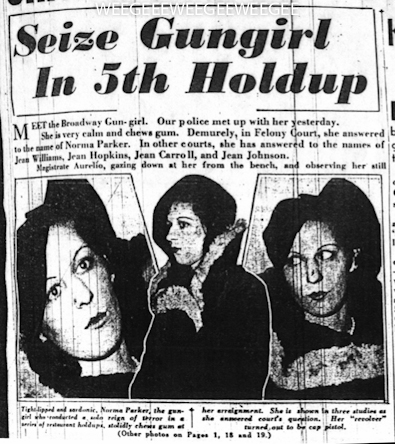 “Broadway Gun Girl,
Norma Parker, pictured behind bars after her capture while sticking up a West Side cafe with a cap pistol. Insert shows another pose of the coy moll, who is also facing trial for stabbing girl pal…”

“Seize Gungirl in 5th Holdup
Meet the Broadway Gun-girl. Our police met up with her yesterday.
She is very calm and chews gum. Demurely, in Felony Court, she answered to th ename of Norma Parker. In other courts she has answered to the names of Jean Williams, Jean Hopkins, Jean Carroll, and Jean Johnson.
Magistrate Aurelio, gazing down at her from the bench, and observing her still…”

“Tight-lipped and sardonic, Norma Parker, the gun-girl who conducted a solo reign of terror in a series of restaurant holdups, stolidly chews gum at her arraignment. She is shown in three studies as ashe answered court’s question. Her ‘revolver’ turned out to be cap pistol.”

“One case that I broke concerned a girl who was going around holding up only Child’s Restaurants. (She must have like their blue-plate special.) She was making a monkey out of the cops… I remembered having photographed a girl about a year before [1936], who had gotten into a knife fight with another girl over the affections of their mutual ‘Pineapple’ (pimp). Even true love can be overdone, and the unromantic cops pinched her. On the way to the court I photographed her in the patrol wagon, smiling brazenly with a rose between her teeth. ‘Spanish Rose’ was my title for the shot and it made the front pages…”
“On a hunch, I showed the picture of this girl to a detective friend who was working on the case. We went around to the different Child’s Restaurants. One cashier after another identified her as the gun-girl. Soon she was picked up and brought to the West Sixty-fifth Street stationhouse. Her gun turned out to be wooden. While the other photographers were waiting to get her picture, and while she was telling her life story to the cops, I was out selling my picture of her. It made every New York paper but one… The Times ran four lines on the story, but no picture…”
Weegee by Weegee, 1961, pp. 61-62

“I once helped the cops capture a gun-girl. A very beautiful brunette was going around upper Broadway holding up Child’s restaurants. The cops were at their wits’ ends as it made them look very foolish. I was getting annoyed because every time a restaurant was held up I had to go and make pictures which distracted me from Murder Inc., which was my true love. On a hunch, I remembered that some months ago, I had taken a picture of a girl, “Spanish Rose,” who had a little knifing match with another girl over a boy friend. I had taken pictures when the girl was arrested. I played detective and took the photos of the pretty knife-wielder around to the restaurant cashiers who had been held up. They all identified her as the one who had been taking their cash. The cops picked her up quickly and it turned out she had been terrorizing the cashiers with a wooden gun. I think I did her a great favor. The sob sisters went to work on her. She sold her confession to the New York Sunday Mirror, made guest appearances on radio and TV, programs and retired to a life of ease.”
1953

What in the world is Weegee talking about? Perhaps Weegee is talking about Norma Parker, the Broadway Gungirl, the coy moll who chewed gum and dressed in black… There are a few similar details: stabbing a girl over a guy, a toy gun, 65th St., West 65th or West 68th St police stations, holdups in restaurants or cafes, etc… Perhaps, 24 years later, Weegee gilded the rose (“to throw a perfume on the violet, to smooth the ice, or add another hue unto the rainbow”) a bit… The tellings in 1953 and 1961 are very similar. In the next few posts we’ll look a Norma Parker’s arrest in a few tabloids of the time…