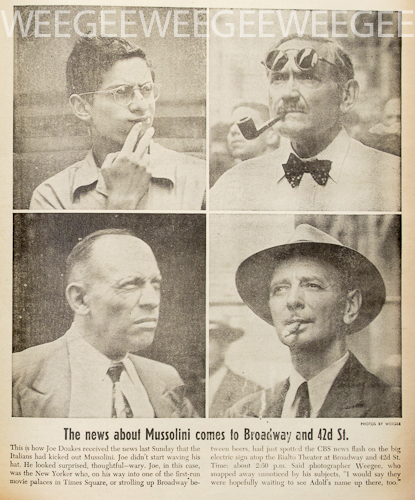 PM Daily, August 1, 1943
The news about Mussolini comes to Broadway and 42d St.
This is how Joe Doakes received the news last Sunday that the Italians had kicked out Mussolini. Joe didn’t start waving his hat. He looked surprised, thoughtful – wary. Joe, in this case, was the New Yorker who, on his way into one of the first-run movie palaces in Times Square… had just spotted the CBS news flash… Weegee, who snapped away unnoticed by his subjects. “I would say they were hopefully waiting to see Adolf’s name up there, too.”
PHOTOS BY WEEGEE

Weegee Daily, August 1, 2013
The news about the Naked City comes to Broadway and 44th St.
This is how the naked cowgirls and boys… spotted the ABC news flash…
PHOTOS BY CEEGEE