PM Daily, Vol. 3, January 27, 1941, No. 194, p. 8
Blaze Makes 200 Homeless, Kills One and Injures Seven
A four-alarm fire swept the upper floors of the six-story apartment house at 552 Riverside Dr., near Claremont Inn, during snow storm early yesterday morning. By the time the fierce blaze was brought under control, 200 people were homeless, one tenant had been suffocated, another was cut by glass, and six firemen were hurt.
Many of those forced to the street in scanty attire were students at the nearby Juilliard School of Music. Tenants in nearby buildings sheltered many of the homeless. A tailor around the corner on Tiemann Pl. converted his shop into a refuge, and 60 of the younger tenants were taken to Knickerbocker Hospital [Founded in 1862; 70 Convent Av., Manhattan, now apartments – according to wikipedia] for the night. The Red Cross precinct disaster service swung into action, supplying clothes and funds for those who needed them.

When the flames got to work on the metal cornice it burned with this blowtorch effect, the glow being visible across the Hudson.

Tenants got off the upper fire escapes just before they were enveloped by flames. Cause of he fire was not determined.

This girl musician is laughing hysterically. She saved her precious violin, but dashed to the street in nightgown and without shoes. 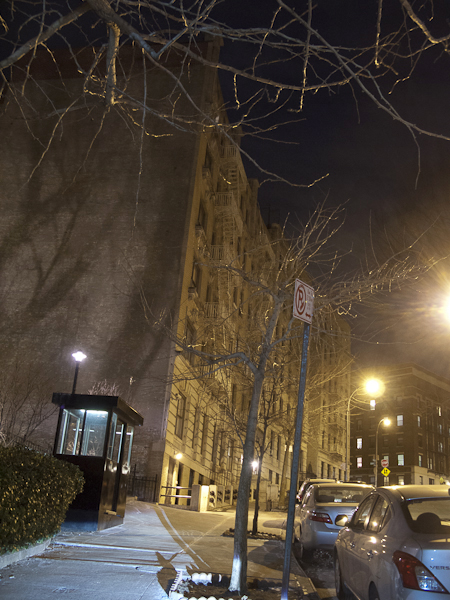 Weegee Daily, January 27, 2013
No Fire Yesterday or Today… The building is pet friendly…

(Noir-ish lighting ;-)
Perhaps coincidentally, currently there is a sixth floor apartment available, for sale, for $369,000. From a real estate website: the building was built in 1910; the building has 68 units, 6 floors, a live-in super, common court yard, bike storage, storage, fitness center and central laundry room. The building is pet friendly. 60 years ago today, it’s very likely that this apartment was damaged in the above fire…
Weegee Daily Photos by Ceegee 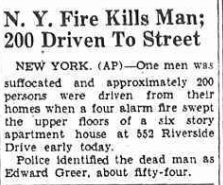