In last week’s issue of the magazine, Tad Friend spoke to Dan Gilroy about his new film, “Nightcrawler,” in which Jake Gyllenhaal plays a man who sells footage of violent crimes to a Los Angeles TV station. Gilroy told Friend that he sees the character as a version of the photographer Weegee, who captured crime scenes and other jarring late-night incidents in New York in the nineteen-thirties and forties.

Weegee, whose real name was Arthur Fellig, lived across the street from a police headquarters, in Manhattan. He listened to his police scanner while lying in bed at night, and was known to arrive on the scene before the police did. After photographing incidents in what he referred to as “Rembrandt lighting” (“Even a drunk must be a masterpiece,” he once said of his approach), he would develop the film in a makeshift darkroom in the trunk of his car. His grim (and, at times, satirical) images—which were often the only photographic accounts of these after-hours occurrences—were widely published in New York papers, and continue to be exhibited today.

Several of the titles and dates in the New Yorker’s Photo Booth post are inaccurate, perhaps their famous fact checkers do not check on-line material, here are two corrections: 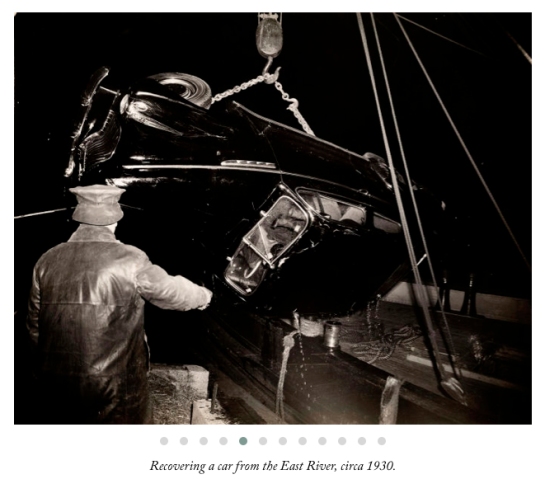 “Out of the river,” February 24, 1942 (Variant published in PM with the caption: “At 9 last night, the car, a shiny, black Buick, with Rhode Island license plates, was hoisted out of the [Harlem] river by a tug. Body of a Negro (feet are visible) was found in the car. Police Sgt. William Wilson eye witnessed accident.”)

All images are screen shots from The New Yorker’s Photo Booth, November 10, 2014

(We still haven’t seen any evidence proving the existence of a “makeshift darkroom in the trunk of his car.” It’s funny that if the theme of “The Original Nightcrawler” and the “Rembrandt Lighting” pieces is late-night incidents, that only two or three of the twelve photos were made, or possibly made, after 9 PM. A few were made during day (or late afternoon) light and a few were made indoors, at an unspecified time… Three or four of these images were published in PM, one was published in the (perhaps) The Daily News and about half were published in “Naked City”…)

Perhaps it’s just the idea of a Weegee, pre-war night-crawling in the noir of a black and white world, (with only a superficial knowledge of his life and work) that is appealing… Perhaps at this moment, Weegee is more of an archetype than a real person…

“The New Yorker did a profile on me. They sent down Joe Mitchell. When the New Yorker does a profile they really do a job. That guy, Joe Mitchell, did everything but come to live with me. (I think he was angling for that, too, but I had no room in my place behind police headquarters.) Mitchell not only had a pencil and a pad of paper, he had an X-ray machine stuck in the back of his head. We saw so much of each oher, that I got to know Mitchell as well as he got to know me. Maybe better.
PM asked me to do a profile on Joe Mitchell… which I did. I out-profiled the profiler. It was, as you might say, tit for tat.”
Weegee by Weegee, pp. 84-85

(Our opinion: Neither profile was ever published. As we understand it, they didn’t get along very well… Wonder if they ever crossed paths, much earlier in their careers, near police headquarters…)