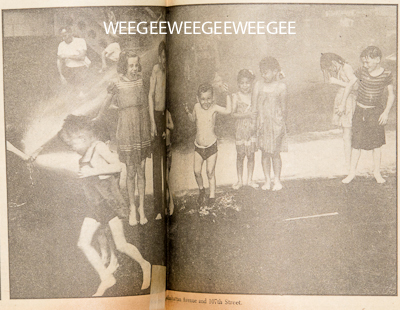 PM, November 10, 1946
“These pictures are from Weegee’s People (Duell, Sloan and Pearce, $4), which will be published on November 11. Weegee says of his new book: ‘Unlike my previous book, Naked City, this is New York in a happier and gayer mood. I went looking for beauty and found it. Here’s my formula – dealing as I do with human beings, and I find them wonderful – I leave them alone and let them be themselves – holding hands with love-light in their eyes – sleeping – or merely walking down the street. The trick is to be where people are.’ Weegee’s next venture will be movie-making.”
(That’s a significant quote… We know when Weegee’s People was published and perhaps the first printed reference to Weegee’s film making and Weegee’s “formula” for making his photographs and the location of a well-known photo is printed…)
“Weegee’s People at Manhattan Avenue and 107th St.” (That’s here on a Google map.) Summer Upper West Side, ca. 1945