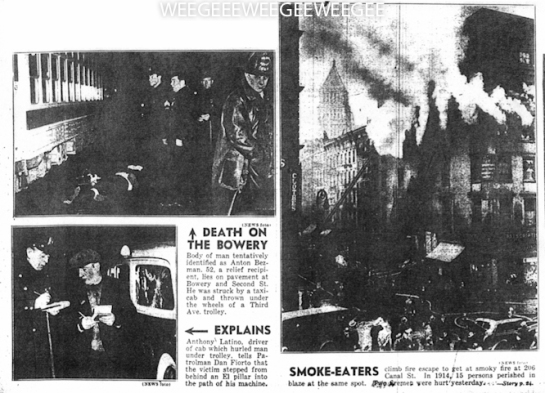 “DEATH ON THE BOWERY
Body of a man… lies on pavement at Bowery and Second St. He was struck by a taxicab and thrown under the wheels of a Third Ave. trolley.”

“EXPLAINS
…driver of cab which hurled man under trolley… the victim stepped from behind an El pillar into the path of his machine.”

“SMOKE EATERS
climb fire escape to get at smoky fire at 206 Canal St. In 1914, 15 persons perished in blaze at the same spot. Two firemen were hurt yesterday.”

One or two or three of these photos, credited to NEWS photo, may have been made by Weegee…