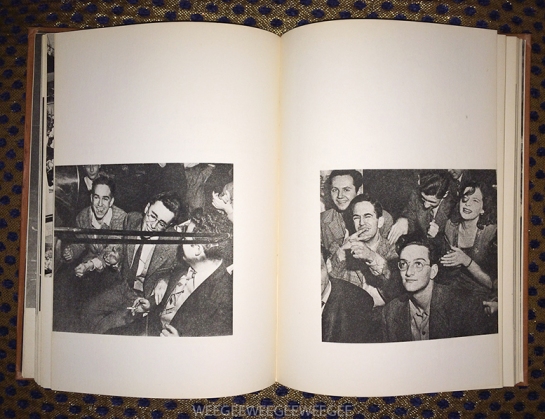 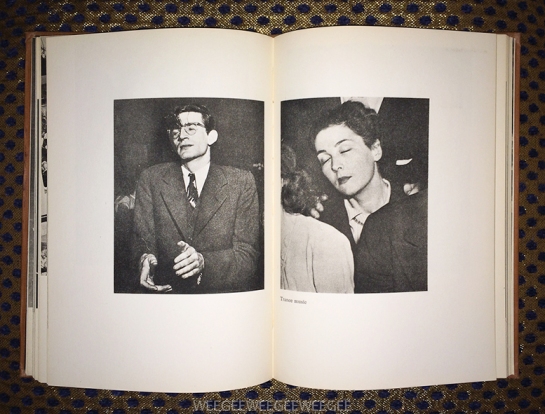 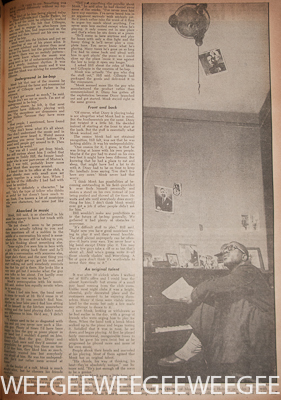 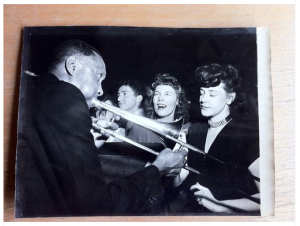 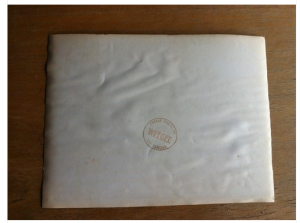 COLEMAN HAWKINS
will be in the Jazz at the Philharmonic concert this Saturday, Nov. 29, at Carnegie Hall at 8:30. The concert, a tribute to Billie Holiday, will also feature the King Cole Trio.

Continuing the Weegee and music theme…

To copy myself, nonsense created for something/somewhere else:

About two years before Louie Hardin became Moondog (in memory of a pet dog), he was attending daily rehearsals of the Philharmonic in Carnegie Hall (after befriending conductor Artur Rodzinski) and living in the top room of a brownstone on 56th Street, (between 8th and 9th Avenues). Hardin came to Manhattan in November 1943 after studying music in Iowa and Memphis. He was born on May 26, 1916 and died September 8, 1999.

Did he have any plans for the next years?
He squatted on the sleeping bag again and laughed. “I’m going to write music,” he replied. “I’m going to write my fool head off.”
Did he see many people? Did he have plenty of friends?
“Oh, yes. I meet people all the time.” He threw back his head again, and laughed. “I’m somewhat of a wolf. I know many women. But my life is lonely. I have to maintain a certain independence, and put everything into my music.”
We stood up to go, and he stood up too. As we walked down the flights of stairs we asked what his favorite piece of music was.
“Mozart’s G Minor Symphony,” he said immediately.
Why?
He paused on the steps. “It seems to me a perfect blend of the classic and romantic ideal.”
Did he wish sometimes that he had been born in ancient or medieval times where he could find romance?
“No,” he said earnestly. “You can be yourself in any age. You don’t have to follow the herd.”

Moondog to his credit wasn’t fond of the Christ-like reported likeness. In the liner notes to a 2005 CD, The Viking of Sixth Avenue, Moondog commented on the PM profile:

When I first got to New York they wrote me up as “a man with the face of Christ.” I put up with that for a few years, then I said I don’t want that connection, I must do something about my appearance to make it look un-Christian.” And so Moondog became a Nordic warrior; complete with spear and horned helmet: “the Viking of Sixth Avenue.”

About six years after Arthur Fellig became Weegee (in memory of a faddish game), Weegee, also a single-named individualist, expressed a similar idea in a March 9, 1941 issue of PM:

Most photographers always use the same old methods. We’ll assume that a horse-drawn wagon is going over the Williamsburg Bridge. A car hits it and the driver is tossed into the water and gets killed. The other photographers will take a picture of the bridge and then have an artist draw a diagram showing how the guy fell into the water. What I do is go and see what happened to the poor old horse…
One time one of the newspapers assigned me to a three alarm-fire… I came back with a picture of a monster whale that had drifted into Sheepshead Bay. I got the whale picture exclusive.
A photographer should have confidence in himself and if he gets a good idea he should take it, even if everybody laughs at him (or her). 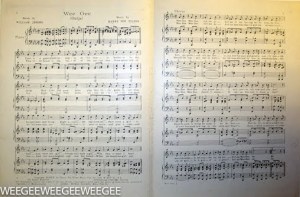 There is a game played by nearly every family. Seems to be the thing. Rich and poor folks play this little game to see what future days may bring.
Right across the hall from me… there lives a girlie dear. And when her girl friends call each night… Why this is what I hear?
Wee Gee, Wee Gee tell me do… Tell me if my loving baby loves me true… Tell me quick and tell me fast is our love too pure and good to really last…
Oh Wee Gee, Wee Gee you know me… I will never tell him don’t you see?
Once he used to bring me candy by the box… Now he only calls to have me darn his socks… Is he true, the sly old fox…
Tell me Wee Gee do… do…

This little board is the ruler of the nation now. Some game talk of fun. Right in your own home settles any little row most every home has one.
Old maids love it most to death and play it night and day. And one maid laughed and lost her breath. When she heard one girl say.
Wee Gee Wee Gee tell me do… Are the men who marry girlies always true? Should the supper table wait for the ones who really love to come home late…
Oh Wee Gee Wee Gee should I swear.. If up on his coat I found a hair? If your husband talking in his sleep says “Pearl… Does it mean a present or some other girl.. Is it girl or is it Pearl?
Tell me Wee Gee do… do…

Entirely irrelevant… (not a song about President Hoover’s pooch: “President Hoover was so pleased with his first elkhound Weegee, that it was decided to get two more elkhound pups. The White House phoned the office of the gentleman in N. Y. who had supplied the first one…” – New Yorker…)