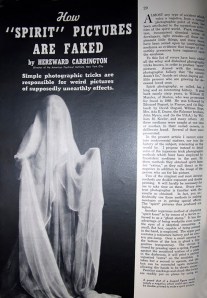 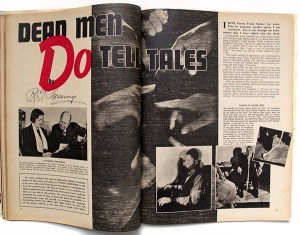 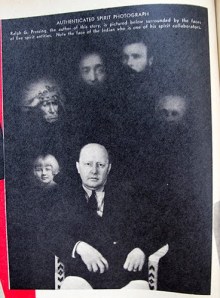 According to the Museum of the Macabre.org: “Ralph G. Pressing was a Spiritualist who founded the Psychic Observer newspaper in 1937. He and his wife Juliette operated the business out of a print shop(!) in Jamestown, NY.”

“Countless psychic manifestations have been witnessed by R. G. Pressing, (in the bottom two photos) editor of Psychic Observer, a Spiritualist publication… Many times he has heard the dead speak… Ralph G. Pressing is said to be one of the world’s best known investigators of manifestations from the world beyond… In publishing Mr. Pressing’s fascinating article, the editors offer True readers the other side of the picture, told by a man most able to speak…” True, June 1941, Vol. 9, No. 49, p. 60

No Ouija Board needed if you have emanating ectoplasm…