PM, October 12, 1944
“Explanation: Sinatra Opened at the Paramount”
“Frank Sinatra began an engagement at the Paramount Theater here yesterday. He reached the theater at 6 a.m. yesterday, but by that time, a long line – about 1,000 kids, mostly bobby sox girls – had already been waiting for hours in the chill air of morning. While they waited and Sinatra rehearsed inside the empty theater with Raymond Paige and his orchestra. Rehearsal lasted until 8 a.m. and at 8:30, the doors of the theater were thrown open to the madly rushing, crowding, shoving, elbowing followers of The Voice. They had been playing cards, eating sandwiches from paper bags, and drinking hot coffee from thermos bottles while they waited. Some of the girls refused to have their pictures taken, covered their faces with their hands. They were playing hookey from school and jobs, and planned to stay in the Paramount all day and all night to see each of Sinatra’s five appearances on stage.”

“While he rehearsed and his followers waited, weary-eyed Sinatra drank milk, learned his cues, went through his paces at the mike with out singing, relaxed as much as he could.”

“Outside, meanwhile, the lines grew longer as the Bobby Sox Brigade converged on 43d St. and Broadway. At 7 a.m., when this picture was made, the line extended halfway to Eighth Ave.”

“Although 25 City policemen were on duty to keep the kids in order, special New York guards had their hands full keeping the entrance to the Times building on 43d St. clear.”

“After the doors were thrown open at 8:30, and the kids had been seated, and the feature picture had been run (during which the kids screamed “We want Frankie”), Sinatra brought ecstasy…”

“…to his legion of patient admirers. Photos by Weegee, PM” 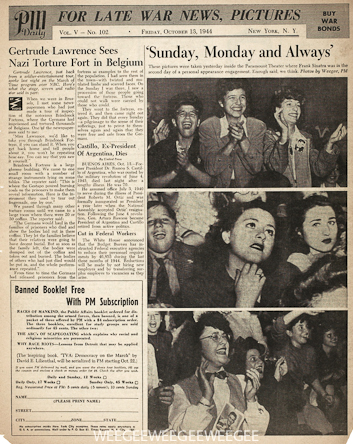 PM, October 13, 1944
‘Sunday, Monday and Always’
These pictures were taken yesterday inside the Paramount Theater where Frank Sinatra was in the second day of a personal appearance engagement. Enough said, we think. Photos by Weegee, PM“