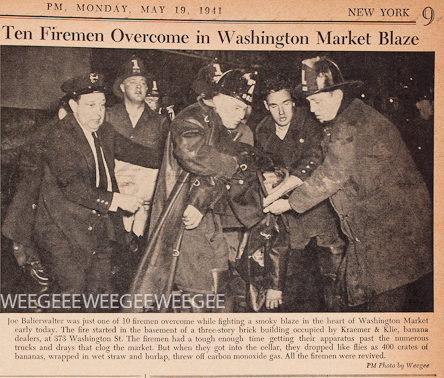 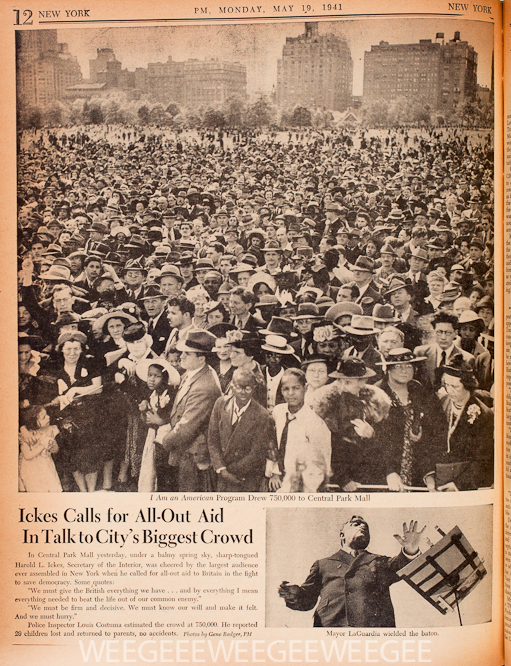 “Ten Firemen Overcome in Washington Market Blaze”
“Joe Balierwalter was just one of 10 firemen overcome while fighting a smoky blaze in the heart of Washington Market early today. The fire started in the basement of a three-story brick building occupied by Kraemer & Klie, banana dealers, at 373 Washington St. The firemen had a tough enough time getting their apparatus past the numerous trucks and drays that clog the market. But when they got into the cellar, they dropped like flies as 400 crates of bananas, wrapped in wet straw and burlap, threw off carbon monoxide gas. All the firemen were revived. PM Photo by Weegee.”

“Ickes Calls for All-Out Aid in Talk to City’s Biggest Crowd”
“…Secretary of the Interior, was cheered by the largest audience ever assembled in New York when he called for all-out aid to Britain in the fight to save democracy…”
“I Am an American Program Drew 750,000 to Central Park Mall.”
“Mayor LaGuardia wielded the baton.”
“Photos by Gene Badger, PM”