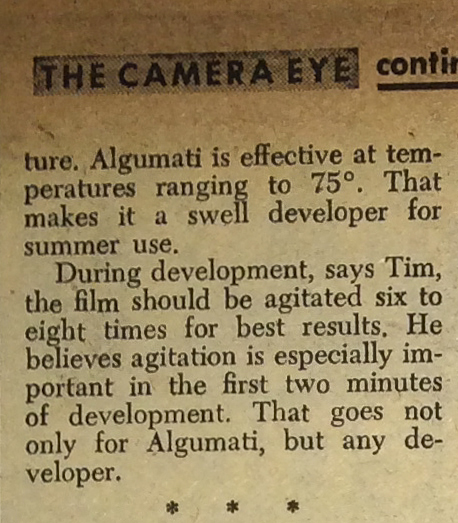 Photo by the great Morris Engel; his archive is here…

We’ve got a developer here at PM called Algumati. First time I saw it labeled on the crocks in our darkroom, I was impressed. It looked Latin and very scientific. It fooled me completely. For, actually, the name was coined right here on the premises from the first two letter of the names of our darkroom technicians – Alex Fraser,Gus Rickarby, Marty Kunkel and Tim Hoffmann -the four men who cooked up the recipe for this soup.
For a year now, Algumati has been a real PM exclusive. But I have succeeded in worming the formula from its inventors, and they have consented to let it be passed on to any of you who would like to whip up a batch.
Here’s how:
First mix 190 grains metal (developing agent), four ounce sodium sulphite (preservative) in three-quarters of a quart of water at 125 F. Pour into gallon jug. Next, mix 130 grains glycin (developing agent), two ounces kodalk (accelerator) and 22 grains potassium bromide (restrainer) in three-quarters of quart of water at 125 F. Pour this into jug with first mixture and add two and a half quarts o cold water t0_ make full gallon.

This formula was evolved to get the best out of certain contrasty emulsions. It is not intended for all types and makes of film. We use it to process Super XX and Panatomic X. We find it eliminates harshness in highlights, brings out details in shadows and gives full gradation of tones throughout.
Tim Hoffman, spokesman for the Algumati copyright owners, advises that this soup should be used full strength. The average development time (in tank) is about eight minutes at 70 F. Close-up flashes develop in about six minutes at the same temperature. Algumati is effective at temperatures ranging to 75 F. That makes it a swell developer for summer use.
During development, says Tim, the film should be agitated six to eight times for best results. He believes agitation is especially important in the first two minutes of development. That goes not only for Algumati, but any developer.