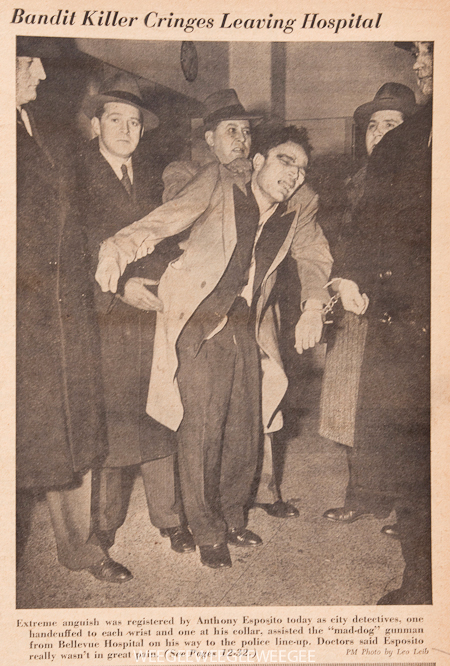 “All were bad, vicious movie-type Dead-End kids, gun-toters in their teens, problems for the police. Emanuel and Nino are now in Sing Sing.
For journalism’s most vivid story of Death in Fifth Ave. PM recommends its readers to today’s Daily News. Max Peter Haas, 33, German born photographer, was filling his Leica…”
PM, January 15, 1941

“For the first time since Bruno Richard Hauptmann, police today permitted photographers in the line-up room at headquarters. The subject was Anthony Esposito, under indictment with his brother, William, for the murder of a business man and a policeman in Tuesday’s tragic Battle of Fifth Ave. The angry gunman ducked after Weegee took the above.”
“The detectives manacled to Esposito, didn’t want their names or pictures in the papers. They obliged by turning around, holding the gunman by head and arm so he couldn’t duck again. The yard-stick (top photo) is on the line-up platform, where Esposito had stood, refusing to answer questions. “He looked like a sullen, surly, snarling animal, Weegee reported. “He stumbled and sagged over to one side like a drunk.” 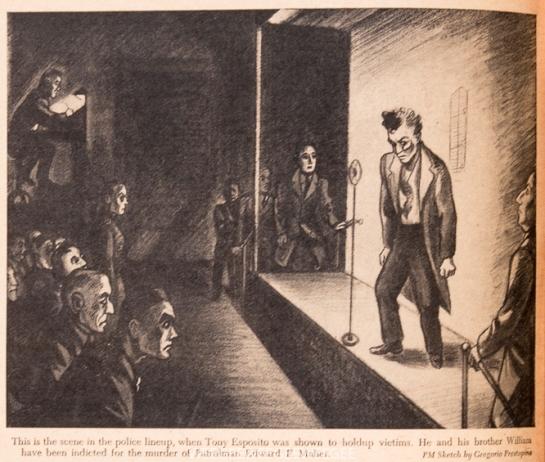