“Here’s What Makes a Museum Modern by Henry Simon.”

(“Coffee Concerts” started at 9 PM. Museum admission was $1.50. In May 1941 $1.50 had the same buying power as $27.59 in March 2021; in May 2021, museum admission is $25. The Sophistichords, Herman Chittison, solo, and John Kirby and his Orchestra, from Cafe Society Uptown… One of the songs performed by Herman Chittison at MoMA on April 30, 1941 was The Man I Love. One of the songs performed by John Kirby and his Orchestra was Double Talk.) 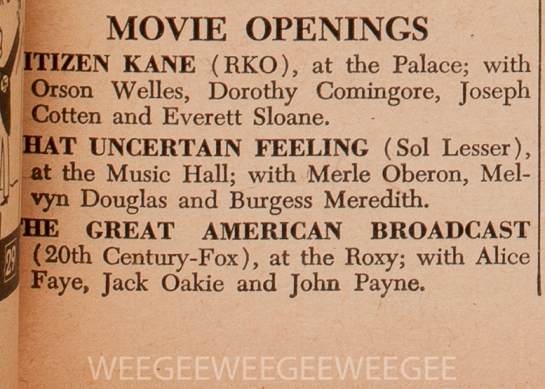 ‘Citizen Kane’ Gets A Running Start
Citizen Kane, the Orson Welles movie which for four months has withstood a nationwide Heartskrieg, opens tonight, 8:30, at the Palace. Its advance business, nourished by the newspaper controversy, is booming…
…”I can always show it,” he said. “I’ll show it in a ballpark with four screens, in auditoriums, at fairs, in circus tents, in necessary…”