Perhaps today marks the 70th anniversary of the publication of Naked City. To commemorate this historic event… Starting with what might be the first “rave notice” in print: 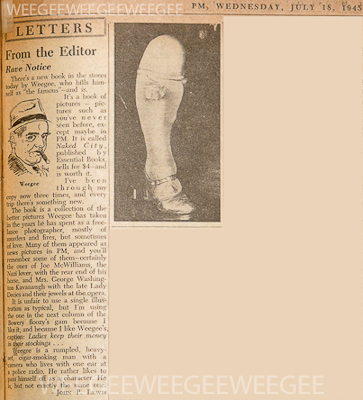 LETTERS From the Editor
Rave Notice
“There’s a new book in the stores today by Weegee, who bills himself as “the famous” – and is.
It’s a book of pictures – pictures such as you’ve never seen before, except maybe in PM. It is called Naked City, published by Essential Books, sells for $4 – and is worth it.
I’ve been through my copy now three times, and every trip there’s something new.
The book is a collection of the better pictures Weegee has taken in the years he has spent as a freelance photographer, mostly of murders and fires, but sometimes of love. Many of them have appeared as news pictures in PM, and you’ll remember some of them – certainly the ones of Joe McWilliams, the Nazi lover, with the rear end of his horse, and Mrs. George Washington Kavanaugh with the late Lady Decies and their jewels at the opera.
It is unfair to use a single illustration as typical, but I’m using the one in the next column of the Bowery floozy’s gam because I like it, and because I like Weegee’s caption: Ladies keep heir money in their stockings…
Weegee is a rumpled, heavy-set, cigar-smoking man with a camera who lives with one ear at a police radio. He rather likes to pass himself off as a character. He is, but not exactly the same one.”
-John P. Lewis
PM, July 18, 1945, p. 19