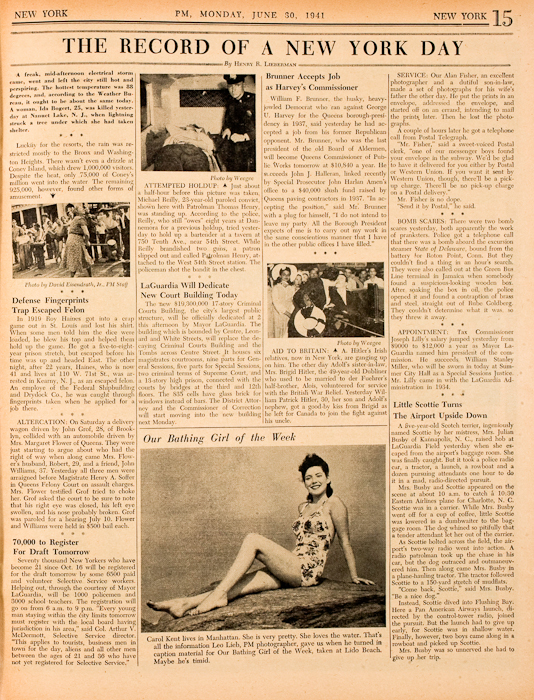 The Record of a New York Day

A freak, mid-afternoon electrical storm came, went and left the city still hot and perspiring. The hottest temperature was 88 degrees, and, according to the Weather Bureau, it ought to be about the same today. A woman, Ida Bogart, 25, was killed yesterday at Nanuet Lake, N.J. when lightening struck a tree under which she had taken shelter.

Luckily for resorts, the rain was restricted mostly to the Bronx and Washington Heights. There wasn’t even a drizzle at Coney Island, which drew 1,000,000 visitors. Despite the heat, only 75,000 of Coney’s million went into the water. The remaining 925,000, however, found other forms of amusement.

ATTEMPTED HOLDUP: Just about a half-hour before this picture was taken, Michael Reilly, 23-year-old paroled convict, shown here with Patrolman Thomas Henry, was standing up. According to the police, Reilly, who still “owes” eight years at Danemora [Danemora! That’s a coincidence…] for a previous hold up, tried yesterday to hold up a bartender at a tavern at 750 Tenth Ave., near 54th Street. While Reilly brandished two guns, a patron slipped out and called patrolman Henry, attached to the 54th Street station. The policeman shot the bandit in the chest. Photo by Weegee

AID TO BRITAIN: A. Hitler’s Irish relatives, now in New York, are ganging up on him. The other day Adolf’s sister-in-law, Mrs. Brigid Hitler, the 49-year-old Dubliner who used to be married to der Fueherer’s half-brother, Alois, volunteered for service with the British War Relief. Yesterday William Patrick Hitler, 30, her son and Adolf’s nephew, got a good-by kiss from Brigid as he left for Canada to join the fight against his uncle. Photo by Weegee